Last weekend was a foodie and music lovers perfect Festival, The Big Feastival.

Set in the gorgeous countryside of the Cotswolds at Alex James’s farm. Presented by Jamie Oliver and Blur’s Alex James with an amazing line up of chefs, cooks and musicians. Featuring the best street food and restaurant stalls as well as cooking classes and demos.

I was attracted to the Big Feastival this year due to the addition of a Healthy Living Zone , added to highlight all the latest thinking on eating well and healthy. There was to be gluten free , grain free, paleo , raw stalls and demos with healthy eating pioneers including Hemsley and Hemsley and Deliciously Ella . I was thrilled to be accredited with a media pass and was determined to Max out my weekend finding out as much as I could for myself and my followers on twitter and Fabulously Free From.

Our trip to Kingham in the Cotswolds on friday did not entirely go to plan. Our renovation project a Bambi Airstream was not as far advanced as we had thought so we spent an unexpected 5 hours waiting for it to be campsite ready! Once on the road we made good progress and arrived at Merry Weather campsite close to the Festival site , plenty of time to prepare for the two days ahead.

Unfortunately due to the teething troubles with Betty the Airstream we missed out on friday afternoon and evening at the festival . I was desperately disappointed to have missed out on seeing at the Big Kitchen Monica Galleti, Nathan Outlaw and Richard Burr of bake off fame.

Saturday brought sunshine and light cloud desperate not to miss a thing we were up and out quickly after  homemade grain free fruit bread and a full english ready to take on the day. Only 14 mins from the Festival site we arrived just as gates were opening . There was no massive queues and parking was easy. We checked in and I quickly purchased an itinerary in the form of a programme on a lanyard.  I knew today was going to be quite a challenge to get around everyone I wanted to see.

My main area was to be around the Healthy Living Zone and Big Kitchen thankfully the quietest part of the vast festival.

Firstly I made my way to the Oatly Kitchen counter to hear Anna Jones.

Here was to be the place I would be able to get up close to health food pioneers and chefs during the Feastival. Just a few tables and chairs set out in a rectangle covered by an open sided marquee with bright coloured deck chairs around the edge and a couple of bench seats. Very cosy and never overly busy.

Anna talked about her passion for healthy vegetarian food and about helping Jamie Oliver to write some of his books and how she had now written her own vegetarian recipe book.

Following Anna was Ella Woodward better known as Delicious Ella. Ella talked about managing her illness by changing her diet dramatically to healthy eating including cutting gluten and refined sugar and vegetable oil.

Admitted to being a sugar addict and advised using maple syrup etc with control and to find a balance. Ella’s top tip was to buy nuts and flour in bulk online. Deliciously Ella also talked about using coconut oil and olive oil in her cooking and baking and eating lots of good healthy fat especially her favourite avocados . I found her to be very honest and realistic . She summed up by saying she wanted to get vegetables in the centre of the plate. 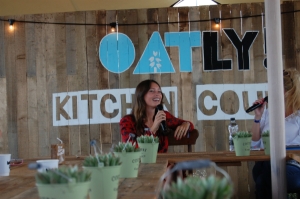 Following Ella I dashed over to the Big Kitchen a partly covered large stage with simple seating and extra tv screens to go and see Jasmine and Melissa Hemsley of Hemsley and Hemsley demonstrating a lime and avocado cheesecake and other healthy meals. 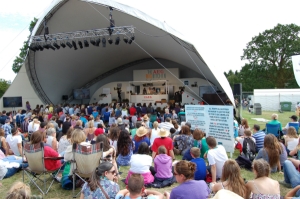 The ladies talked lots about healthy fats including butter and coconut oil. They talked of their love of cabbage and bone broths. The Hemsley’s also encouraged the use of natural sugars instead of refined sugar but only in low quantities.

Raw vegan blonde was next on the Oatly kichen counter art with fresh fruit and veg.

This really was a brilliant opportunity to see them and ask questions and hear more about their philosophy . In the slow cooker they had beef bone broth bubbling away and also the famous spiraliser for anyone to come and have a go with. They spoke about their book the Art of Living well, which I can recommend. 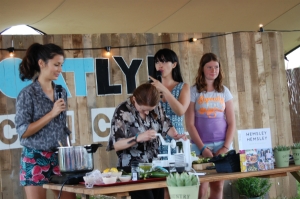 The spiraliser was popular with the gathered crowd and a huge plate of courgetti in a pesto sauce was passed around the table to try. I had seen Jasmine and Melissa only a few weeks before in the literature tent at Latitude festival. But I have to say this was far better and easier for the ladies to demo properly. 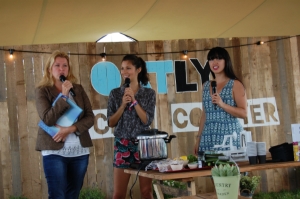 There was time for a Q&A and in such a small group worked really well. Their passion for not wasting food and using every part of the animal was good to hear. They talked of their love of saturated fat including dripping and butter, I was thrilled. Gelatine from chicken feet and bones also got a mention as well as encouraging everyone to watch the new Sugar film called That Sugar film! Probably my favourite Health pioneers at the Feastival.

Around the healthy living arena area was plenty of food to tuck into including Raw Press from London serving cold pressed juice and almond milk. I had the chocolate raw pressed almond milk which was very refreshing 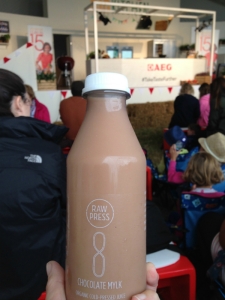 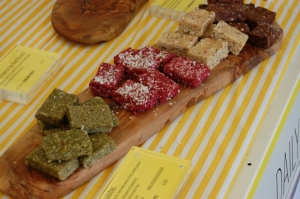 As I have so many additional intolerances as well as being intolerant to gluten I bulk baked before the festival and froze it all for our trip. Lunches and dinners for me were gluten free dough balls, grain free quiche lorraine , salad, cheese and fruit and water. If you were just gluten free there was many stalls offering gluten free options including raw press. there was also lots to sample from stalls like UGG Foods offering grain free bread and muffins to try and mix’s to buy 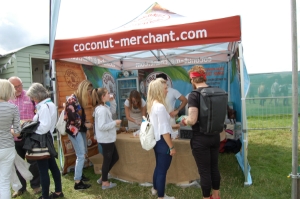 Dried Kale looked tasty, sadly ran out of time to go back and buy some.

The Primal Pantry were in the Healthy living zone offering tasters and their grain free bars for sale.

Deliciously Ella and Olivia Wollenburg were on the Big Kitchen stage demonstrating a chocolate orange brownie recipe a large crowd came to watch.

Later at the Oatly kichen counter I heard Olivia Wollenburg talk about her line of crumbles Livia’s crumble part of Livia’s Kitchen. unfortunately the crumbles are not gluten free,  I think she is missing a great opportunity but she told me that it was not cost effective as 100 % dedicated gluten free factories are more expensive. 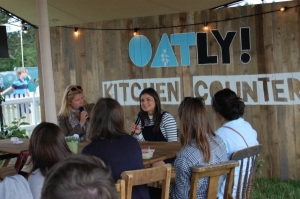 On the Big Kitchen at 5.30 pm was Gennaro Contaldo this was a fun cooking demonstration followed by Jamie Oliver at 6.30pm as you can see I hadn’t left the Healthy Living Zone all day as there was so much to do. All this time there was music on three stages the Main stage, Udder stage and the Bandstand. Also BBQ demonstrations and even yoga

As you would expect Jamie’s Big Kitchen demo was the most entertaining he also had a guest all the way from Brazil cooking steak on a BBQ on stage.

It was difficult to get close as the crowds by now had grown enourmosly.

Earlier on the Main Stage had been Iris Gold, Johnny Borrell and Zazou , The Beach , Hudson Taylor and Grandmaster Flash

On the main stage that evening was Ella Eyre, Example and DJ Wire and the headliner was Dizzee Rascal

Sunday brought a damp start but once again knowing that some of the speakers started early we were quickly on our way after a cooked breakfast with plenty of eggs and bacon to keep us going.

Natasha Corrett was first on the Big Kitchen stage demonstrating here recipe for a grain free quiche using cauliflower in the base. She urged everyone to keep your way of eating healthily sustainable. In her opinion 70% healthy 30% normal eating So as not to make the task to great to stick to.

Natasha massaged kale with lemon juice to make it easier to eat in its raw form. She also used this in her quiche.

Next on was Joe Wicks The Body Coach I have to admit not knowing the name at all but he had a huge following mainly amongst the ladies. 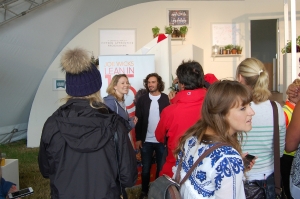 A star of the internet due to his 15 minute meals and new book called Lean in 15 . Joe chose to make a Thai green curry which looked good and then a turkey burger using lean turkey mince and a white processed burger roll, really not sure that was the best choice! He did though encourage the use of coconut oil and rubbished the old school pyramid way of eating.

Emily Watkins was up next on the Big Kitchen Stage as the ran poured outside we stayed huddled under the stage over hang . Emily is a local chef who ‘s pub The Kingham plough is ranked in the Times top 25 pubs for food and two AA rosettes .  She made a delicious looking trifle

Natasha Corrett Honestly Healthy a self  trained cook who encouraged the gathered crowd to avoid meat, dairy and sugar and to cut out processed food. She was asked during the Q&A what she couldn’t live without  food wise Nashasha answer was Lemons and avocados . The weather by now was not too nice and we were all tightly packed under the open sided marquee. 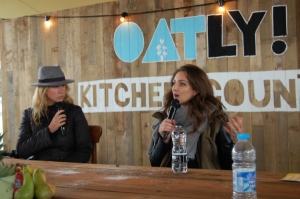 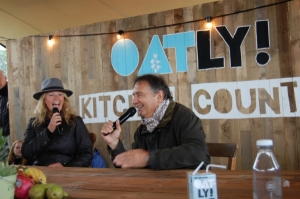 It was amazing to be so close and hear him talk with such passion about good local healthy food and the quality of british chefs, he teaches many of them! We heard all about his recent series on TV Kew on a plate and about seasonal fruit and vegetables and seasonality. He is also passionate about the environment and was very animated when speaking it was quite hard to take a photograph as he never sat still.

Raymond was definitely the highlight of the weekend for me.

Jamie Oliver was once again on the main stage but due to the sheer number of people watching we decided to take the opportunity to look around more of the festival.

The choice of food stalls was amazing, even for those who avoid gluten there was a good choice 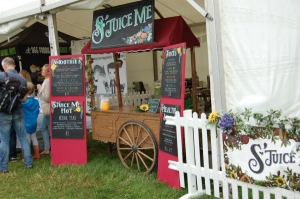 Some delicious pork belly cook on the BBQ 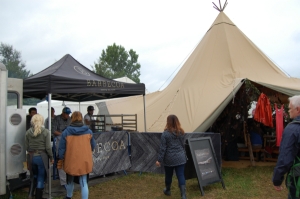 corn on the cob 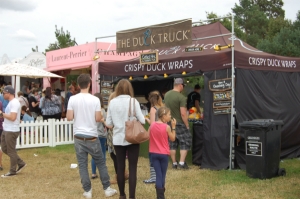 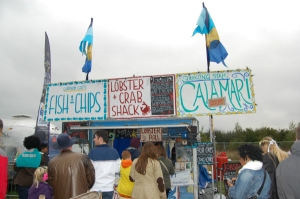 There were also gluten free treats including 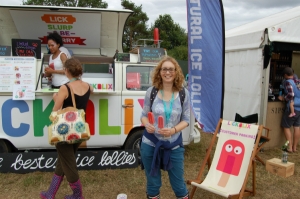 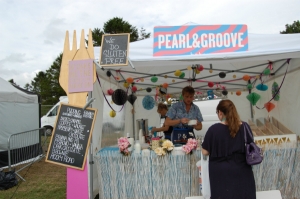 I preferred the healthy Paleo bars from Primal Joy Foods 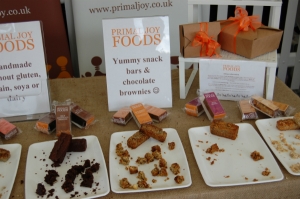 lots to try and buy!

and then the weather started to improve

We watched Mabel Rogers on the Bandstand

and enjoyed a Rocktail

After all the speakers it was time to relax! 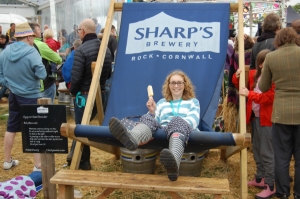 This festival is very family friendly with the best choice of food I have every seen at a festival. No wonder its called Feastival

and a helter skelter, bunting, fairy lights and balloons. Plus an enourmous live music stage with some big names over three days. 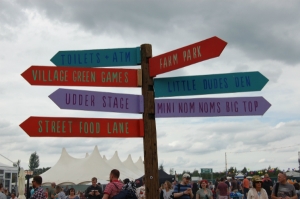 There was so much to do I barely scratched the surface. I really focused on the Healthy Living Zone which I loved . The Feeling with Sophie Elis Bextor followed by Paloma Faith brought the Big Feastival to a grand finish. Even the earlier rain couldn’t dampen the festival goers spirits

I’m sure we will be back next year for more tasty food, great music and interesting talks and demonstrations. Feel free to get in touch if you have any questions. 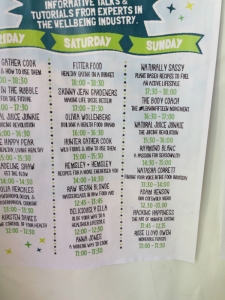 2 thoughts on “Fabulously Free From at The Big Feastival”